DIFFERENCES BETWEEN SIMULTANEOUS AND CONSECUTIVE TRANSLATION 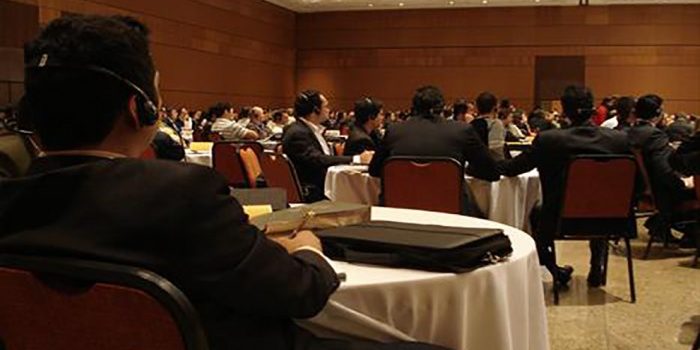 During meetings, conferences, TV shows or gatherings involving interchange of ideas between people without a single language as means of connection, it is common to come across situations of simultaneous or consecutive translation.

The translator, in a general concept, works with written documents, such as books, legal materials, manuals, websites, subtitles and any textual information. The interpreter’s activity, on the other hand, is oral. As such, interpreters translate what is being spoken, which requires a good memory for the spoken word, because at the same time that they are interpreting into the target language, they have to pay attention to the next sentences to be translated in sequence.

There are two ways of providing this verbal interpretation: one is simultaneous interpretation, in which the interpreter is generally isolated from the receivers, transmitting messages instantly to listeners through audio equipment; whereas in consecutive interpretation, the interpreter only translates content to the audience after certain periods or phrases are completed, requiring no equipment. Despite being a less fluid form of transmitting ideas, this ensures greater reliability, because in the simultaneous format dialogue and interpretation need to be synchronized, sometimes only conveying the general ideas of each sentence rather than a more literal translation.
Whatever the model or need, ZAUM has competent professionals who can provide natural communication, prioritizing confidentiality and clarity.

Tailored translation | Do your glossaries reflect your brand?
24 de May de 2016

AUTOMATIC TRANSLATION | WOULD YOU TRUST YOUR LIFE ENTIRELY TO A ROBOT?
10 de May de 2016