In this case: we worked with PPT and HTML files on a challenging project that involved the translation of a Software User Guide into several languages, with a very short deadline.

July 2012: This case illustrates many of the capabilities that ZAUM Language Services offers: A global technology company (listed among the top 25 in the 2011 Global 500 ranking) reached out to ZAUM for a complex project that involved the translation of a Software User Guide (including Help and FAQ) of more than 10,000 words to various languages, within a very short deadline. They also requested that the translation be delivered in a different format from the original files, with added features.
The job was broken down into the following phases:

1) Translation of text in an Asian language (in characters) into U.S. English.

2) Technical re-writing of the original text in the Asian language and of the English version to make sure that the text would be user-friendly to the software’s end users.

3) Translation of the final English into a few other languages.

4) Testing, in the localized software system, of the steps and procedures shown in the User Guide, from a user’s perspective. The purpose of this phase was to ensure that all terms contained in the User Guide were accurate and understandable in all
languages.

5) Screenshot generation: during testing of the localized software, we also captured hundreds of high-resolution screenshots, which were later added to the final translated files.

6) Desktop Publishing (DTP): the screenshots were then edited in order to highlight the items mentioned in the text, allowing for easy identification by end users.

7) Based on the standard HTML files sent by the customer, we converted the PowerPoint (PPT) files into localized HTML files and added JavaScript functionality.

ZAUM concluded all phases above within schedule, and successfully adapted a few activities in order to satisfy the client’s changing requirements. We also provided a benefit when we realized that the original document had to undergo some minor changes in order to match the reality of the localized software tested by ZAUM. In the end, ZAUM demonstrated the importance of our capabilities and our flexibility in delivering an added-value service. Afterwards, the client claimed to be very impressed with our delivery capacity, as well as our flexibility and ability to adapt in this specific case. 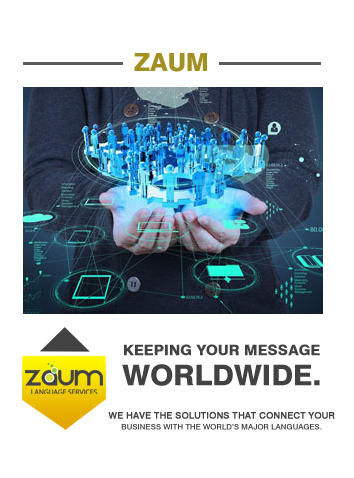