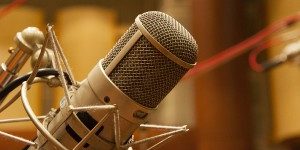 Part of the list of audiovisual translation (TAV) models, along with dubbing and subtitling, voice-over is a term imported from Cinema Studies referring to a type of translation commonly used in non-fiction materials, such as news reports, documentaries and the like. However, this can vary according to the culture of each country.

Predominantly present in editable or recorded content, voice-over provides a new oral representation of the original audio, which is inserted seconds after the original line and finishes a few seconds before it. This lack of synchronized lips leads the viewer to believe that the translation is a literal representation of what was said, given that the original audio is kept in the background and some elements in the translated speech can be identified, lending a certain credibility to the material.

On Brazilian TV, this feature is not yet popular and when it is used, it is usually in the journalistic sphere, denoting veracity of the facts and displayed dialog for greater impact and proximity to the audience.

On the other hand is kinetic syncing, which is the close relationship between gestures and mimicry (accent, age, emotion, intonation, gender, emphasis) in the projection for the translated speech. Moreover, unlike subtitling, it enables the coexistence of two different linguistic codes in the same context.

Translation for voice-over is based on a script with the transcription of each excerpt of material and its duration in the video. With this step completed, the text is translated into the target language, after which the voice talent vocalizes the translated lines. These lines are in turn inserted into the video at a higher volume and with a delay of one to two seconds over the original audio.

In the corporate world, the technique is widely used for translating informational and institutional videos, which are usually short. To help clients and partners communicate their messages in a facilitated and multilingual manner, ZAUM Language Services works with appropriate software and careful selection of translators and voice talents.

Why should I hire a translation company?
27 de March de 2017

Internationalization of IT companies: the importance of adapting the language
16 de December de 2016